Posted on November 6, 2012 by artofthemideast 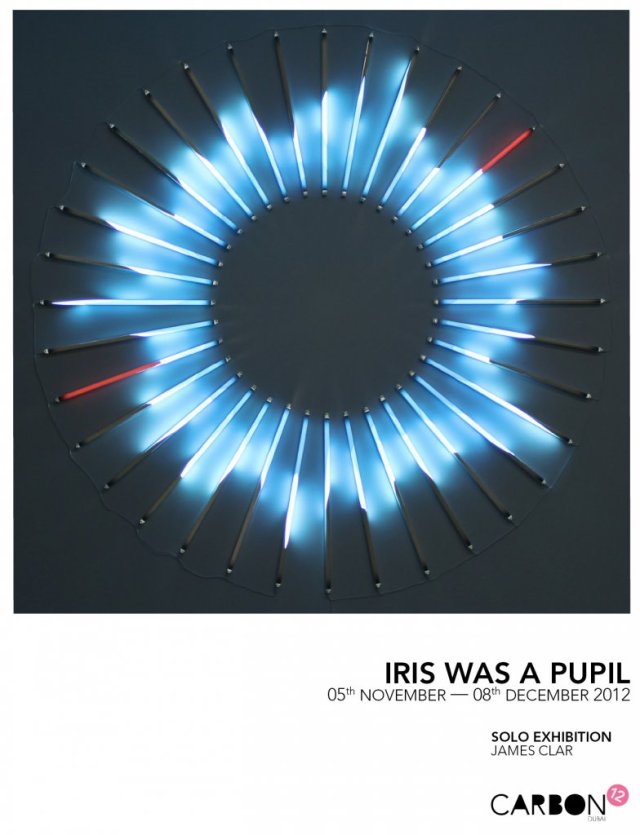 Carbon 12 is delighted to announce the solo exhibition of the American multi-media artistJames Clar, “Iris was a Pupil”, opening on November 5th 2012. As the title clearly suggests it, the new works are about the sensation of visual stimuli, the constant challenge of finding new viewpoints, and the demand to keep seeing things from fresh perspectives.

“Iris was a Pupil” (also the title of a song by techno legends Autechre) also calls the connotation of synaesthesia to mind. The theme of crossing borders is always present in the work of Clar, who lives and works between New York and Dubai: not only in the sense of redefining the physical limitations and boundaries of media (mediums), but also in the metaphysical sense of investigating subjects such as nationalism and globalism in the age of social technologies. Here, he takes a step further, blurring the lines between dreams and reality, synthetic and real.

Aesthetically, his oeuvre is closely related to early minimalism and conceptualism. The new mission is to feedforward instead of to feedback. His technique always allows him to go beyond self-referentiality and touches very current themes while closely investigating the politics of representation. Clar’s work is deeply connected to art historical discourse, but cutting edge at the same time: where most artists would only ask How, Clar’s work is all about the Why.

Lights and filters, brainwaves and diagrams: Clar deals with raw material and raw data. His approach towards subject matter is physical and analytical at the same time, direct in implementation, but meta in discourse. Where new media minimalism meets information theory, Clar is on the bleeding edge: self-sufficient but far from self-contained. The works not only keep exploring the entanglement of aesthetics and theory, but Clar fuses these to something that deserves to be called true media art.

1 Response to Carbon 12 Presents ‘Iris Was a Pupil,’ an exhibition by James Clar from Nov. 5- Dec. 8