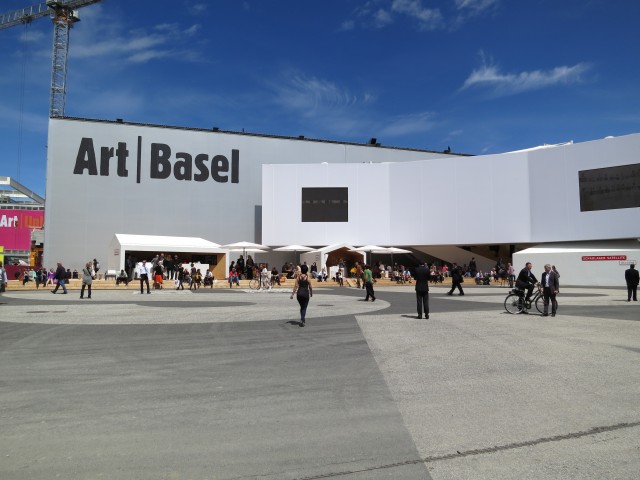 Art Basel is the most significant of all the hundreds of art fairs that take place each year. It is the fair where some of the best artworks are sold for some of the highest prices. I had been to Art Basel Miami, but was expecting this fair to be very different. I took the short hop from London to Basel and arrived in a very quaint, typically-Swiss town. The first thing I noticed was that the whole town had been taken over by the thousands of art aficionados who had converged into Basel from across the world. Every language was being spoken around me, highlighting the fair’s very international tone. I had come to Art Basel on a mission: to find all the Middle Eastern art being displayed at the fair, taking pictures of those works, and documenting them for this blog post. I also wanted to see the Green Art Gallery and Gallery Isabelle Van den Eynde booths at Art Unlimited. I also wanted to head to the Satellite fairs to see the Kashya Hildebrand Gallery’s booth at Scope, and the Lawrie Shabibi booth at Volta. I was inititally not expecting there to be much Middle Eastern artwork at the fair, as Art Basel Miami hardly had any; I was to be quite surprised however.

I pulled up to Art Basel and entered into the gigantic halls. The fair was separated into 4 sections on 2 floors making it easier to navigate. The fair is too large and overwhelming to be done in one day so I chose to do one floor on each of the 2 days I went. The art fair was very well organized, with beautiful booths and fantastic lighting. 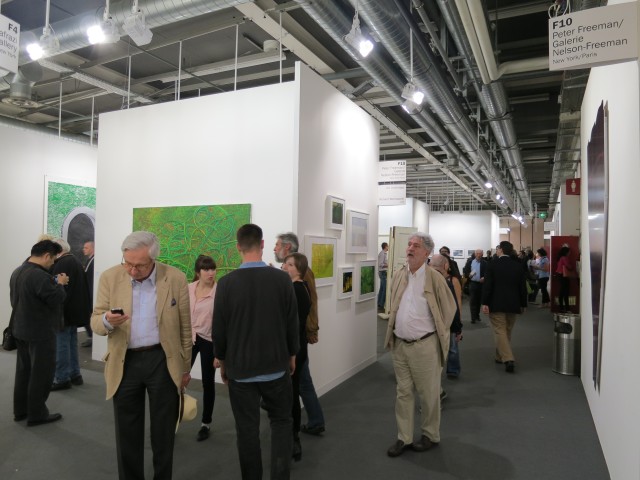 Overall the works being displayed were of very high quality, and the energy around the fair was highly charged. Some of the most expensive artworks in history were being displayed at Art Basel, including a $78 million Rothko at the Marlborough Gallery’s booth. This truly was a coveregence of some of the wealthiest people on the planet. I immediately set out on my task of trying to identify and photograph all works by Middle Eastern artists. I expected a few usual of the usual suspects to be displayed including works by Shirin Neshat and Mouna Hatoum, but I was very suprised to see some fantastic works by quite a few other Middle Eastern artists.  While I am able to recognize many Middle Eastern artworks due to the distinct styles of some of the artists, there were obviously some I would not recognize, so I paid careful attention to the names of the exhibited artists.

The first Middle Eastern artworks I came across were displayed at the Sperone Westater Gallery’s (New York City) booth. Lebanese artist Nabil Nahas’ distinct colorful starfish works stared out right at me from the outside wall of the booth. These beautiful works, which consist of acrylic-on-starfish-on-canvas were very eye catching and had the attention of many of the fair attendees. Nahas’ unique style is easily noticeable from afar. 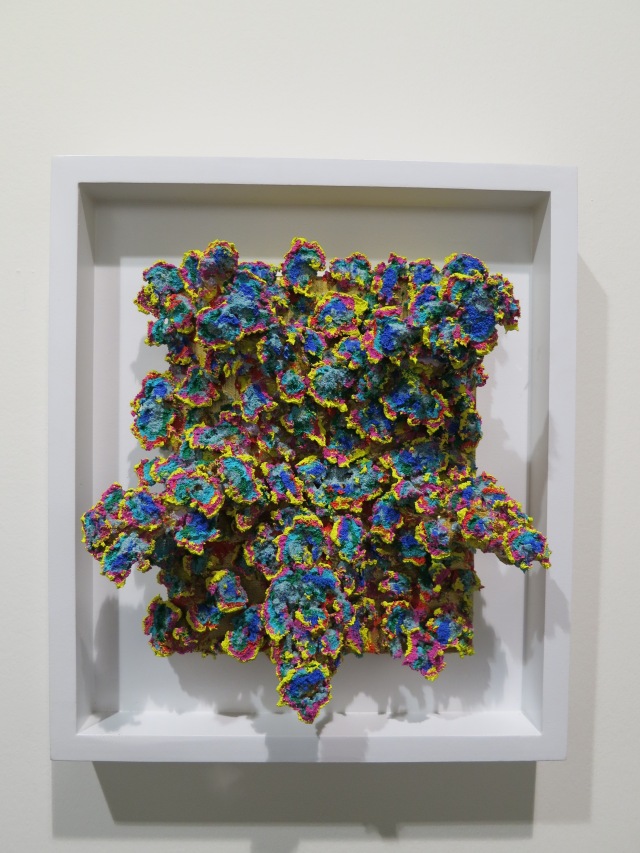 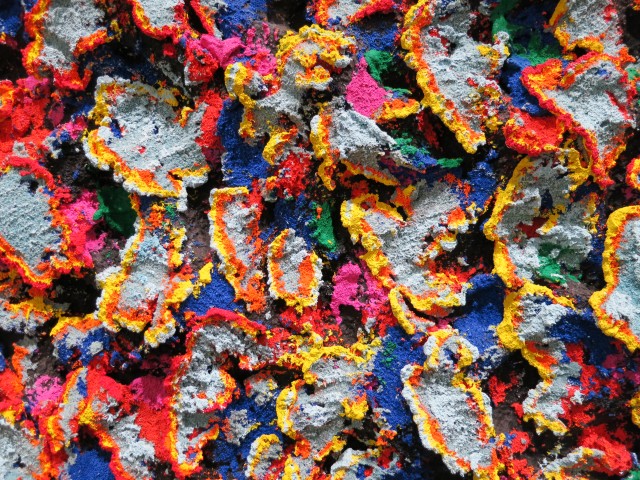 I kept on walking through the fair and recognized Shirin Neshat’s works on the outside of the Gladstone Gallery’s booth. These two works were taken from her previous exhibition with the Gladstone Gallery, and are done in the artist’s typical technique of calligraphy and photography. Shirin Neshat has become a household name in the contemporary art world, so I was expecting at least one of her works to be exhibited, but was pleased to find two. 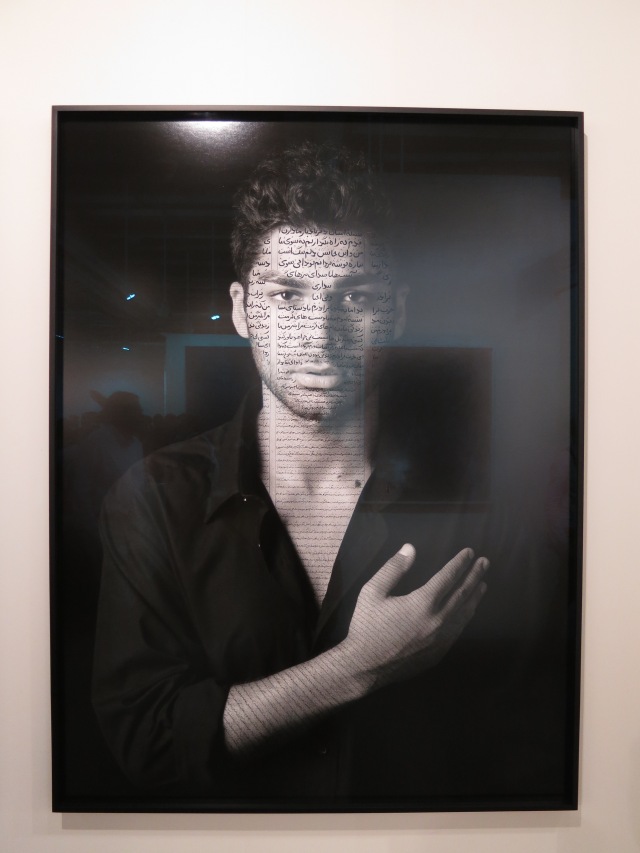 The Alexander and Bonin Gallery of New York had quite a few works by Middle Eastern artists at their booth. Palestinian artist Emily Jacir had two photography works displayed in the booth. Both were images taken in Palestine, which I was very pleased to see being displayed at Basel.

Emily Jacir, Outside the Muqata, 2006, plexiglass and lainated c-print mounted on museum board: 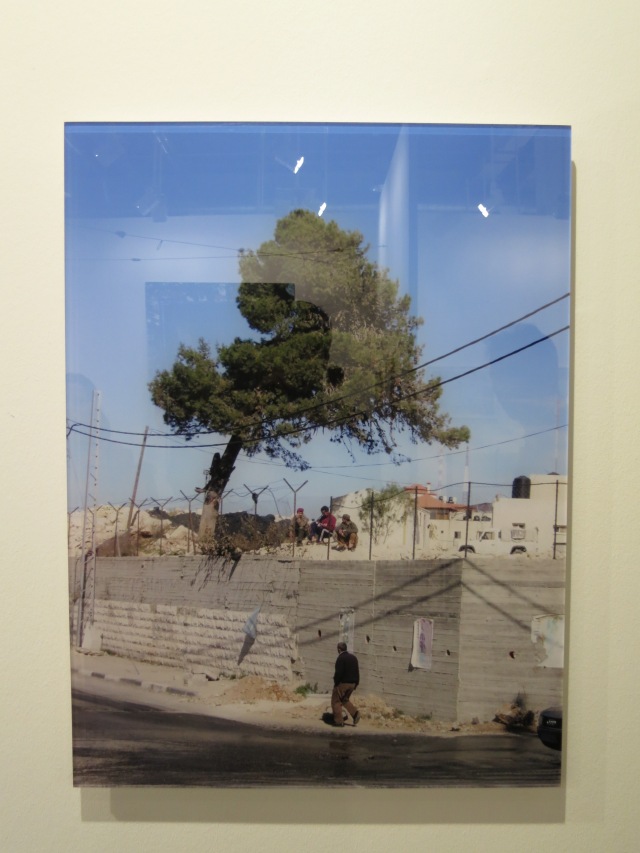 Mona Hatoum was also displayed at this booth, with her work Dormiente. 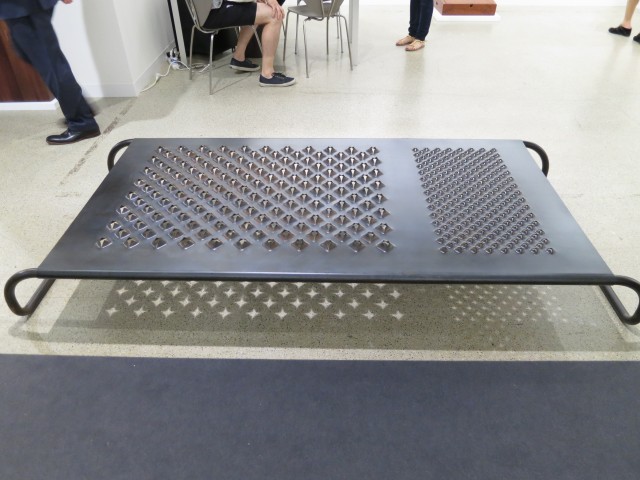 Goodman Gallery of Capetown had a booth with two Middle Eastern artworks. A work by Mounir Fatim titled ‘Oil oil oil oil, 2012’ shows an installation of ropes with oil dripping from the wall to the floor. 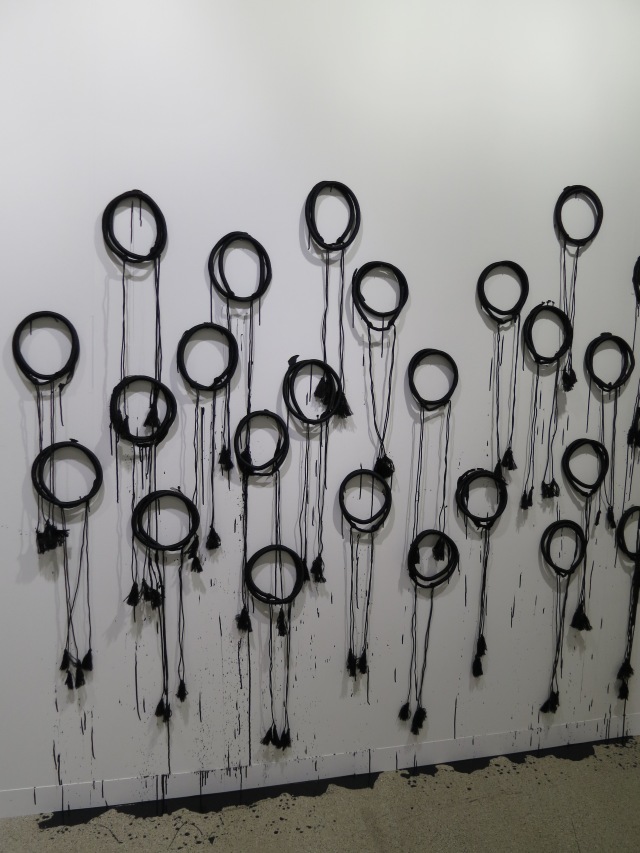 The gallery also had a work by Ghada Amer titled ‘100 words for love’ which consisted of a large round-shaped sculpture made up of the arabic alpahbet.

Galleria Continua had a work by Moataz Nasr and Kader Attia at their booth. 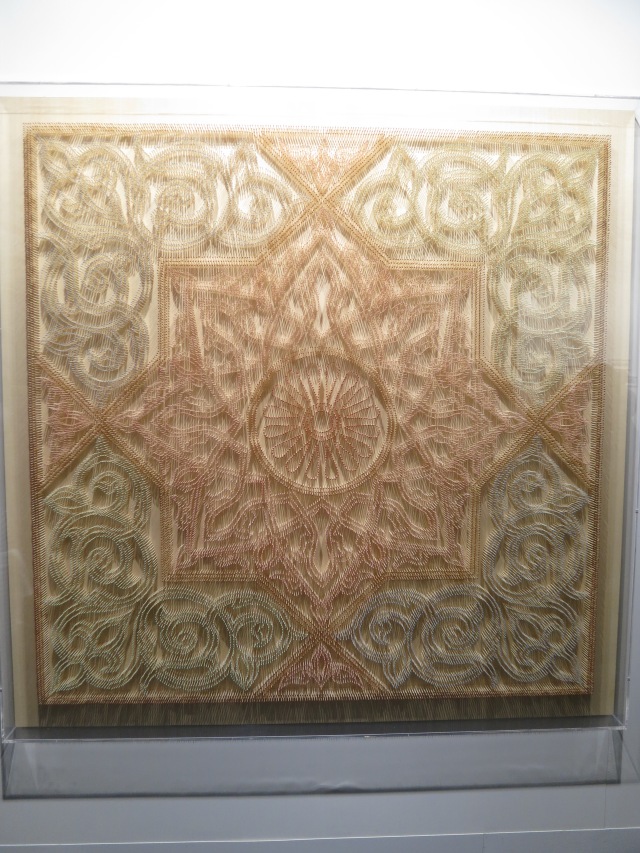 Galerie Perrotin of Paris and Hong Kong had a Farhad Moshiri work at their booth.

I was especially pleased with the Galerie Krinzinger’s (of Vienna) booth which featured a whole wall of works by Kader Attia. This gallery is exhibiting works from the Edge of Arabia show in the following month, and I am very pleased with the gallery’s recent focus on Middle Eastern art. 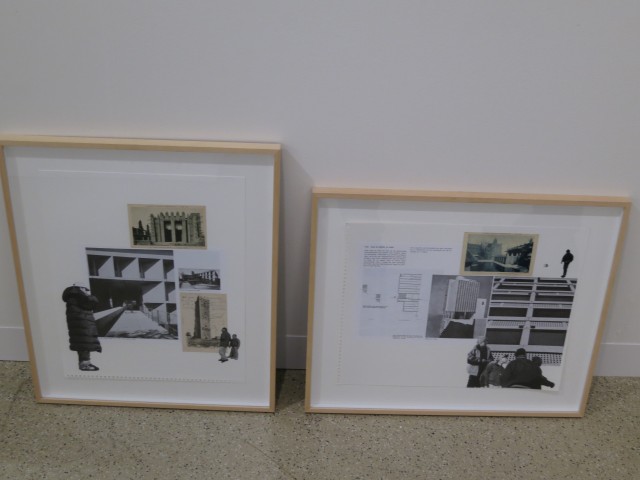 One of my favorite works from the whole art fair was a fantastic piece created by Iranian artist Shirazeh Houshiary that was on display at the Lisson Gallery’s booth. This stunning work is full of intense energy. Shirazeh is greatly inspired by Sufism, and this is truly a top notch work. 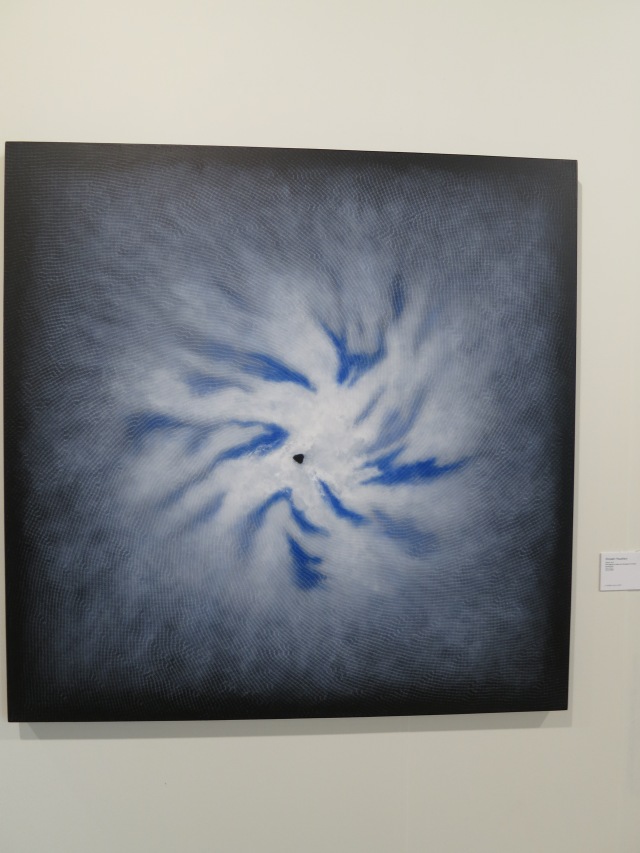 Lehmann Maupin Gallery also had a great Shirazeh Houshiary work. Her works are truly fantastic and are reflected in her work’s prices in which her larger canvases easily fetch over $130,000! 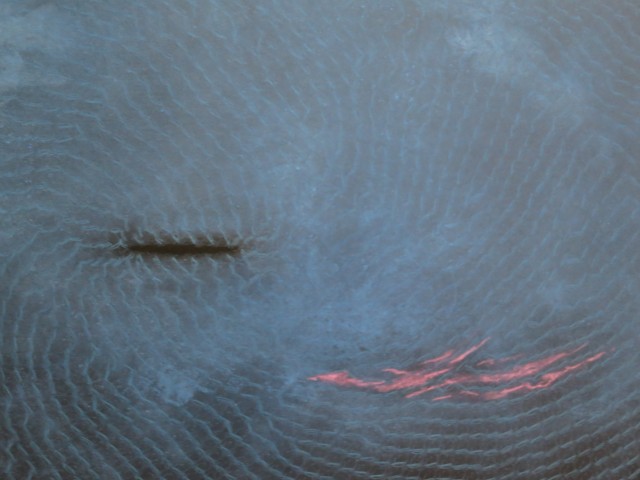 Galerie Nathalie Obaida of Paris had a work by Ramin Haerizadeh and another by Emily Jacir.

Anthony Reynold’s Gallery had a work by Walid Raad 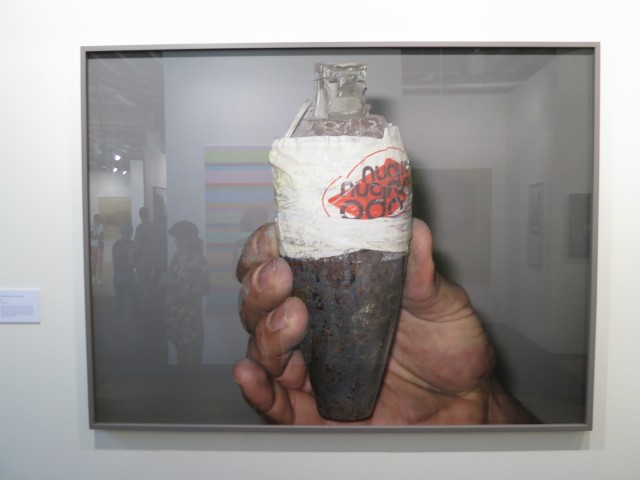 Pace Prints had a work by Ghada Amer and Reza Farkhondeh

Sfeir Semler Gallery had a booth with works by several of the gallery’s stable of artists including a great work by Akram Zaatar.  Wael Shawki had some of his comical puppets on display. Works by Marwan Rechmaoui, Rayanne Tabet, Etel Adnan, Timo Nasseri, and Hassan Sharif were also on display. 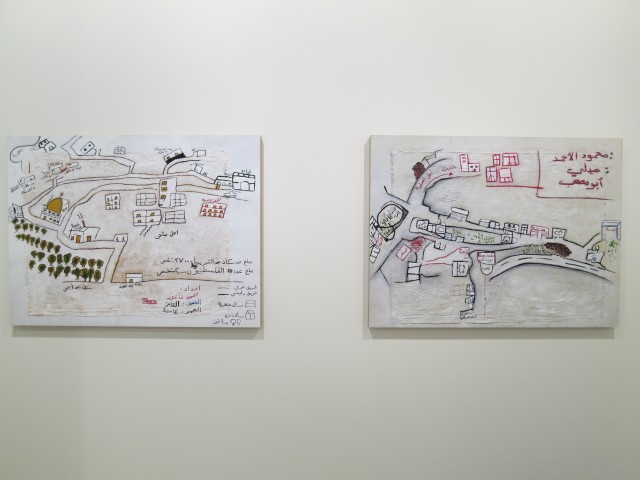 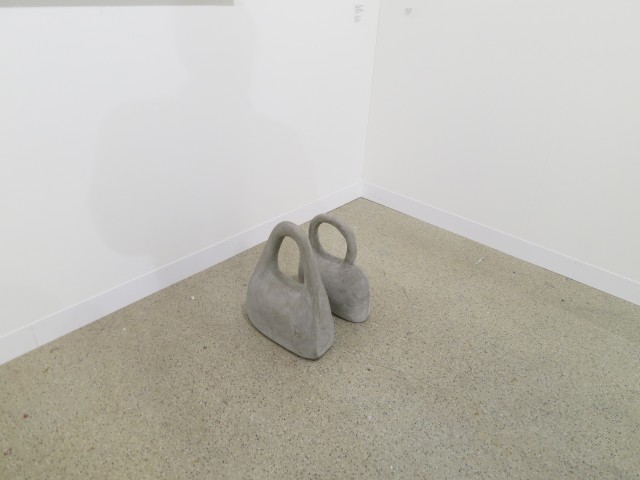 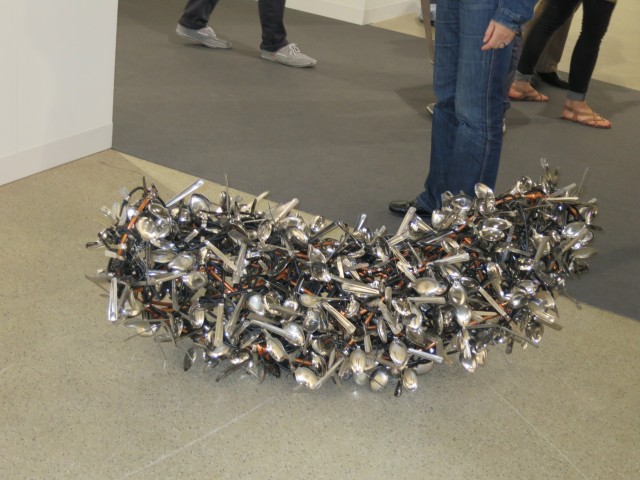 I then went to the Arts Unlimited area where Green Art Gallery were displaying a video by Shadi Habib Allah. This received a lot of interest from collectors 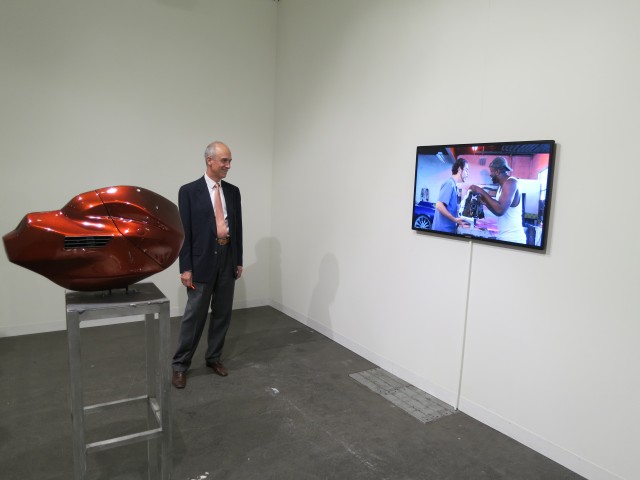 Gallery IVDE had some interesting works by Rokni Haerizadeh. 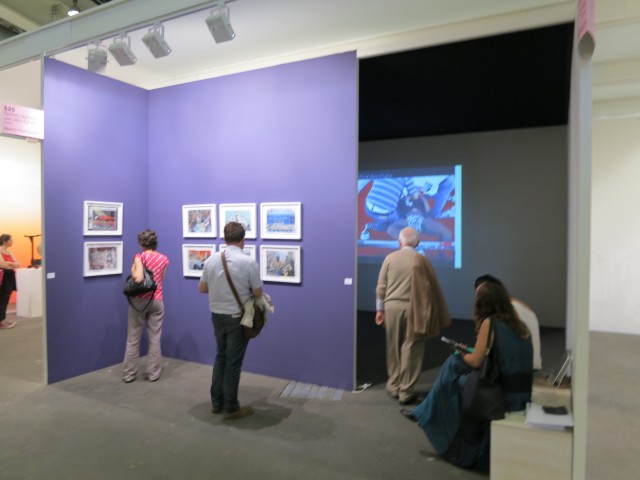 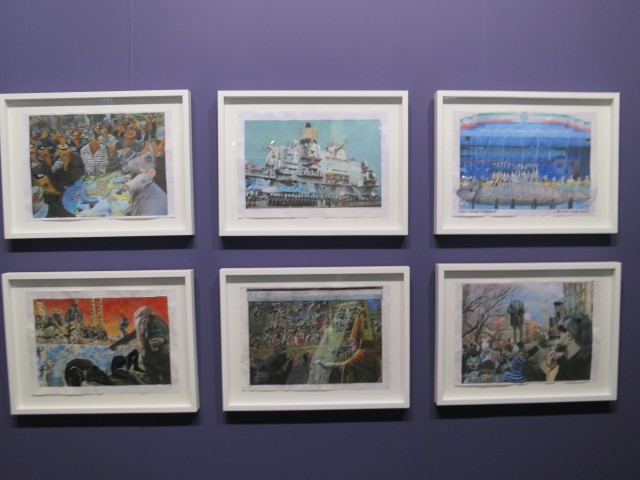 At Scope, Galerie Kashya Hildebrand had some fantastic art work on display including an eye catching hot-pink Reza Derakshani work. I greatly admire Reza’s works and have come across many, but never have I seen a work of his in this color- it was fun and full of energy. He had another, more subtle work on display at the booth as well. Habib Farajabadi also had one of his pieces on display which is a combination of graffiti art and traditional calligraphy.

A work by Reza Derakshani:

Another work by Reza Derakshani:

A work by Habibi Farajabadi:

AB Gallery also displayed some Middle Eastern art works including a work by Halim Al Karim, and a few works by Simeen Farhat.