Rose Issa Projects presents ‘Canary in a Coal Mine,’ an exhibition by Farhad Ahrarnia from Jan. 18- Feb. 25

Posted on January 22, 2012 by artofthemideast

FARHAD AHRARNIA:
“CANARY IN A COAL MINE”

Until the 1980s, British coal miners would take a caged canary with them underground. Because the bird sings most of the time, if the oxygen level dropped or any dangerous gases were emitted, its death was an early warning system.

The phrase “canary in a coal mine” refers to someone who can detect signs of trouble and danger, whose sensitivity makes them vulnerable. The sentiment is an appropriate title for Farhad Ahrarnia’s work: the idea of the caged canary, singing in the depths of the ground, while shovels unearth treasure, digging into the fabric of life.

This is Ahrarnia’s second solo show with Rose Issa Projects, and has some echoes of the first, Stitched (2008), in that it explores the idea of being “stitched up”. For Canary in a Coal Mine he has created larger-format works that combine embroidery, digital photography, sewing needles, silver-bronze shovels and dustpans. 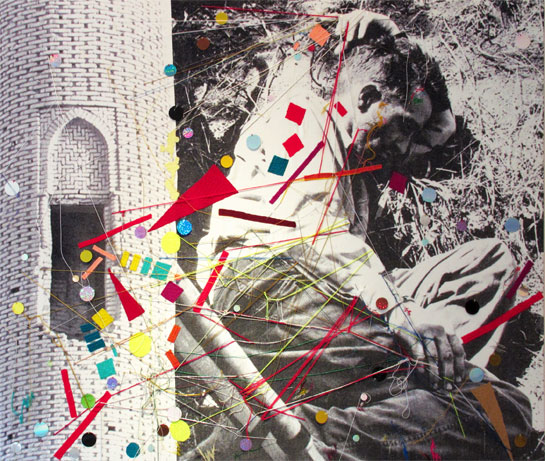 The work, “Ballet Pars” refers to a period in the 1970s when Iran was exporting dancers to the New York City Ballet. “Beautiful is the Silence of the Ruins” refers to the Hollywood icons whose films were dubbed into Persian, and were therefore intrinsic to Persian cinematic culture and experience. Through the act of appropriation and needlework Ahrarnia examines and explores the various tensions risen when contemporary Iranians attempt to ambivalently place, negotiate and reconcile their own sense of deep rooted traditions with the force and consequences of modernity.

The engravings and reliefs on his silver dustpans refer to the pre-Islamic history of Persepolis, Mesopotamia, and Pharaonic Egypt. Similarly, the pointed tips of his silver shovels, like the needles on his embroidered works, encourage viewers to dig into their own history, and discover the many layers of history and life beneath.

This exhibition is accompanied by an illustrated catalogue edited by Rose Issa, with essays by Pippa Oldfield, Sara Raza, Lutz Becker and Christopher de Bellaigue.

1 Response to Rose Issa Projects presents ‘Canary in a Coal Mine,’ an exhibition by Farhad Ahrarnia from Jan. 18- Feb. 25