I visited the Monya Rowe Gallery in Chelsea this past Saturday in order to catch Nadia Ayari’s This Place exhibition. The gallery is located in Manhattan’s Chelsea neighborhood. Over the past few years Chelsea has established itself as New York’s go-to arts destination. Its streets are lined with galleries and art institutions. The Monya Rowe Gallery is located on the second floor of an old New York townhouse. From the street the only sign of the gallery’s existence is a small metal plack on the outside of the building. I walked up the stairs and entered the small gallery. 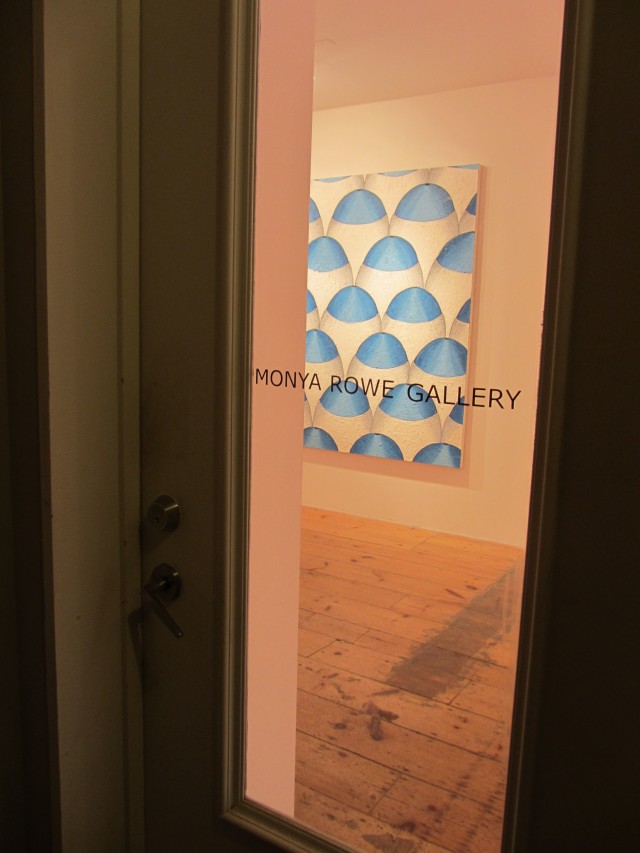 Nadya Ayari, hails from Tunisia but currently lives in Brooklyn. I really enjoyed her work. Check out her paintings from the exhibition: 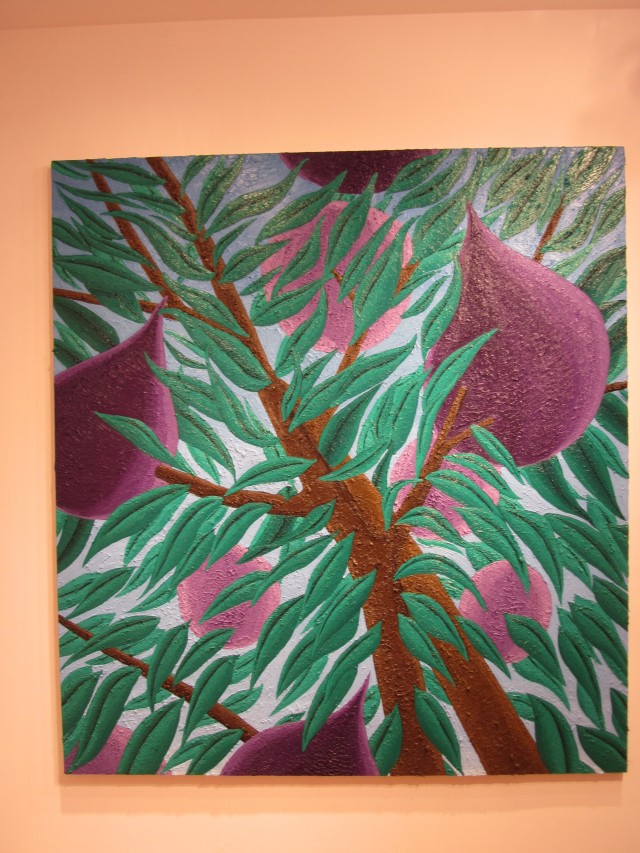 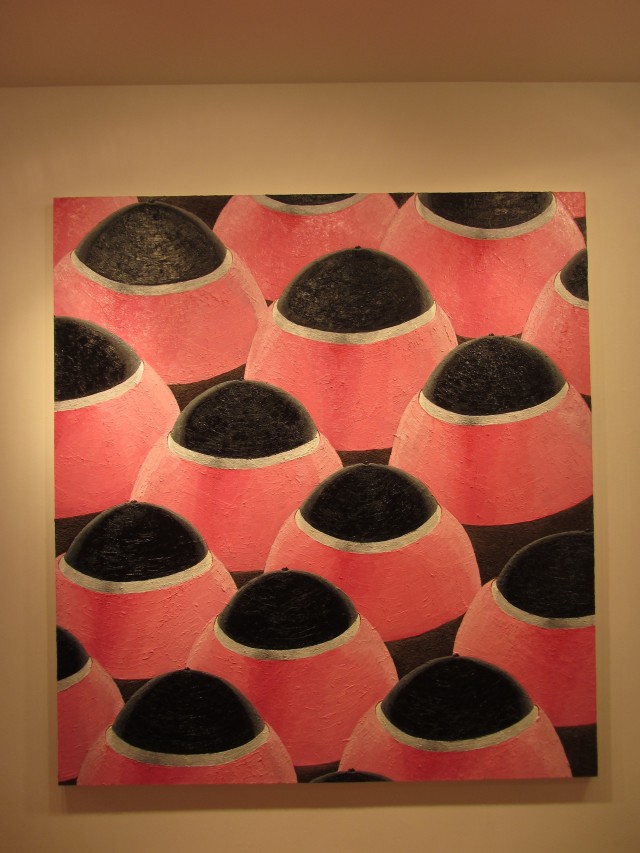 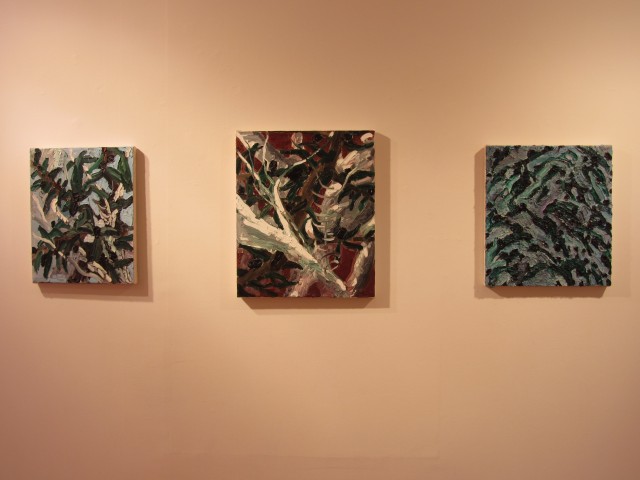 Check out these videos of the exhibition:

This exhibition will be continuing till April 16.

Among the many astounding things about the recent revolutions in Tunisia and Egypt is the fact that they were abetted by an Internet site that is the very apotheosis of contemporary civilization’s tireless prostration to its innately scopophilic tendencies. That the multi-faceted apparatus of electronic media supporting an endemic desubjectification in our own culture, and totalitarian rule in many foreign states, has irrefutably shown itself capable of being redirected towards revolutionary aims is as unexpected as it is unprecedented. One might say, following Lacan, that the recent uprisings have demonstrated the powerful political potential of refunctioning the evil eye embodied in the twenty-first century by an unyielding fascination with the falsely redemptive contrivances of commercial culture as well as by the panoptic apparatus of state surveillance and information control that the youth of North Africa have so heroically undermined. The paintings of Tunisian native Nadia Ayari are allied with the children of the televised revolution’s counter-strategems insofar as the insights they provide into our ambivalent relation to the ineluctable-as- ever modality of the visual serves a similarly “prophylactic” function vis-à-vis the intersecting, and sometimes colliding, scopic regimes of East and West.

The complex interlacing of meaning and association in Ayari’s representations belies the compositional simplicity demonstrated by many of her canvasses. Because Ayari’s signature forms are frequently reincorporated into her ongoing body of work, the appreciation of any given painting benefits from a knowledge of the artist’s visual archive and larger oeuvre. The show’s title piece, for instance, closely resembles a smaller canvass entitled “Blue Eyes” constructed of a similarly patterned field of curvilinear shapes painted in colors reminiscent of the cityscape of Sidi Bou Said, the small Tunisian town, featured elsewhere in Ayari’s work, where André Gide famously sat out the war years. If the blue and white of this previous work directly references the “to-be-looked-at-ness” of what is now a much photographed tourist destination in Ayari’s country of origin, then the fleshy pink of “This Place” gives the alluringly reworked forms a breast-like appearance that symbolically affirms the sense in which the title can be read as a veiled allusion to the motherland.

A fixated, covetous, or appetitive relation to an image embodying the fictitious promise of total satisfaction: this is the very definition of the evil eye. “This Place” first seductively invokes and then denies this insidious position by brandishing an opposing gaze at precisely the place where the viewer’s own kindled vision endeavors to install itself. This refusal by the work to serve as sanctuary for the spectator it self-consciously lures transforms the surface of the canvas into a kind of atopian space—or place—befitting the work’s ambiguous title.

If Ayari appears to maintain an ambivalent relation to the very idea of home, one need, nevertheless, look no further than an example of Islamic iconography ubiquitous in the region of the world from which she hails for an antecedent to her visual strategy. The Hand of Fatima, which features an eye portrayed in the center of a stylized palm, and which, not surprisingly, forms the subject of another of the painter’s works, safeguards against the evil eye by an expropriative procedure that Ayari has cunningly adapted to the specific sociopolitical concerns her own work addresses.

OVER.The intersecting themes of maternal nationhood and the maleficence of the scopic domain are given more ominous treatment in “Curfew,” a work whose title cannot help but recall the bravely violated restrictions imposed upon the protesting citizens amassed in Cairo’s Tahrir Square. Like the Hand of Fatima, which can be arranged with its fingers pointing up or down, the hemispherical form glimpsed in previous works here displays its modular dexterity. If the mosque-like domes of “This Place” invoked a multitude of gazes directed in obeisance towards the heavens, then the inverted and elongated globoids of “Curfew,” arranged like so many clay pots hung from the ceiling of a Mediterranean tavern, suggest a perniciously panoptic god’s-eye view. The ironically cutesy eyelashes protruding from around the whites of Ayari’s meticulously reduplicated optical-areolae are like sea-urchin spines poised to deliver the venomous milk of a fraudulently nurturing parent- nation.

In this regard, the work recalls another piece by Ayari presently hanging in Egypt’s Palace of Arts, the site of Cairo’s fatefully timed 12th International Biennale. That work featured two hybrid watering cans equipped with gun barrels for spouts emptying their contents onto a garden of flowers under the gaze of a disembodied eye. When the Biennale exhibit opened two months ago, the work seemed laden with allegorical cynicism, its brightly painted petals the efflorescence of a decidedly Baudelairian insemination. Now that we have seen that radiant flowers really can sprout from the dung heap of dictatorial subjugation, the painting appears retroactively suffused with an impossible optimism. Such is the nature of Ayari’s pictures whose frequent interpretive equivocacy at times calls to mind the oscillating gestalt of bistable figures like Wittgenstein’s famous duck-rabbit image. Indeed, what remains most constant in the work is precisely an attunement to the fundamental ambiguities of vision and its vulnerability to the exploitative apparatuses that frame everyday existence.

Within the context of this unyielding refusal to place blind faith in what is, nevertheless, a pleasure quite obviously relished in the world of eye-catching things, even a work as seemingly innocent as “Balcony”—the cheerfully painted image of a fruit-bearing tree culled, perhaps, from childhood memories of balmy days on the Mediterranean—can assume portentous overtones. Associating the dream image of a high tree with unobserved observation and the scopophilic drive, Freud reminds us of a certain folk tale prevalent in the foundational literature of both European and Middle-Eastern cultures in which a tree figures as the site of an infidelity carried out by a wife in plain sight of her apoplectically jealous husband. In most versions of the tale, the wife manages to succeed in convincing her husband that the infidelity he has witnessed, usually from a lofty branch (though leave it to Chaucer to have put the carnal act itself amid the foliage), is a distortion created by the tree’s magical effects. The importance of this tale for our understanding of Ayari’s work is twofold. On the one hand it reminds us that the one controlling the scopic regime, in this case the wife, may perpetrate acts of deceit in plain view. On the other hand it reminds us that our picture of the world, like that of the husband in the tale, is always distorted by our own fantasies and desires, which often times include a willingness not to see what is taking place right before our eyes. Ayari’s canvasses are exercises in the abnegation of this latter luxury. The strange fruit we find dangling succulently before us contains a bitter truth about the potential for maleficent cooptation inhering in our scopic desire, even against the better judgment of our conscious minds. Ayari has picked from the tree of visual knowledge, she has tasted its fruit, and what she has lost in innocence, she has gained in a perceptivity more essential than ever for the creation of art in the age of its of digital re-, pre-, and post-production.